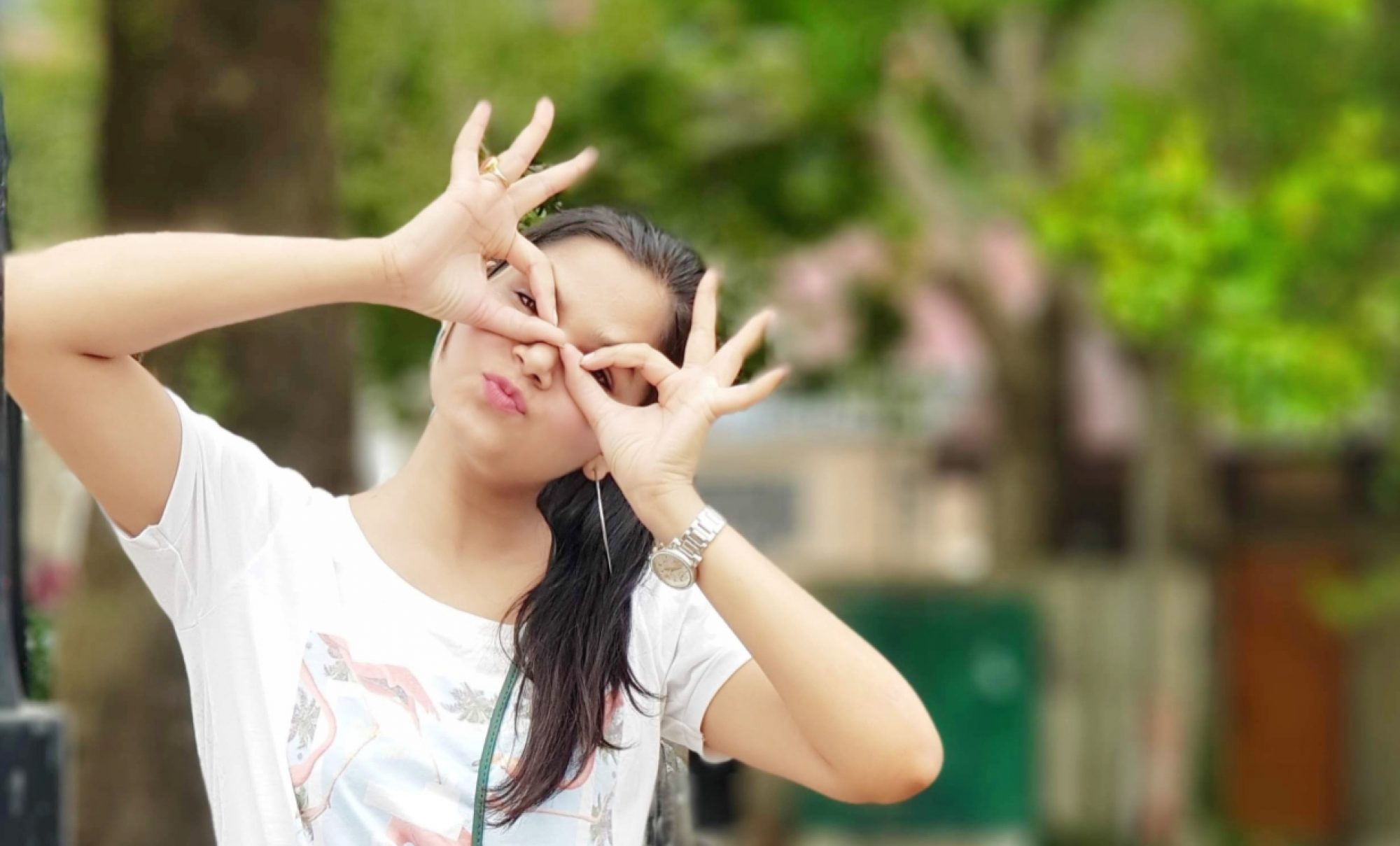 The phone rang and the screen displayed, Incoming call from Ankit. A smile was set on my face. I recieved the call and before I could say hello he shot, “I know you just forgot me. Do you even remember the last time we met.” He was not ready to stop complaining and I could not defend myself as I was at fault. Ankit is my school friend, a very good friend, I must say. It’s been four years since we passed out our schools and all we did was framing plans to catch up somewhere, which never succeeded. But this time, I made up my mind to meet him really soon and we decided to visit the Humayun’s tomb together as I always wanted to see it.

Being poor and a bit shy at meeting lone , I asked my friend, Ajeesha to accompany me. We decided to leave soon after the college and convinced each other to explore this tomb. At the spur of the moment, another of my friend, Annu, also joined us.

Humayun’s tomb was built in the mid 16th century by Persian architect, Mirak Mirza Ghiyas and was commissioned by Haji Begum, the Persian-born prime wife of emperor Humayun.

As we stepped into the lush, fascinating and superbly maintained & perfectly tended gardens that define this striking complex, we were left spellbound right at the ticket counter.

We entered the complex through Bu Halima’s Garden. To the right is the Tomb and mosque of Isa Khan. This graceful octagonal tomb is one of the finest examples of artistic workmanship with attractive floral and geometrical patterns, incised with plasterwork, exquisite and esoteric stone work with a finish of grey Delhi quartzite stone to flaunt a subdued flamboyance. This architectural style was later copied in making both Humayun’s Tomb & one of the seven wonders, The Taj Mahal.

We headed back and moved further to Bu Halima’s tomb. If instead of turning towards Isa Khan’s complex, you walk straight, you would come to Bu Halima’s enclosure. Bu Halima is generally believed to be one of the lady in the harem of Zahir-ud-din Babur (Humayun’s father and the first Mughal emperor). This garden had existed way before Humayun’s Tomb was made but there isn’t much records on Bu Halima.

Walking through Bu Halima’s entrance, you have the option to either head straight to the square complex that makes up Humayun’s tomb. We sat and chatted in the Bu Halima’s Garden for a while and clicked few pictures. Later we proceeded towards the Arab Sarai which has another tomb-mosque complex. Arab Serai was a rest house to accommodate the workers, builders and architects. It also has few prisons made inside it. The garden was beautiful, covered with orange flowers and tall date palm trees. Taking a round there, we moved towards the main complex withstanding the magnificent Humayun’s tomb. Our tickets were rechecked at its entrance.

I was mesmerized and amazed by the very first view- a wonderful piece of art. It’s surrounded by 4 beautiful gardens, known as charbagh which were made in Persian style giving Humayun’s tomb a Persian-mughal look. I saw a mass of visitors around, especially the foreign tourists. Beyond the gate, a wide path with a water channel flowing down its center leads to the tomb. 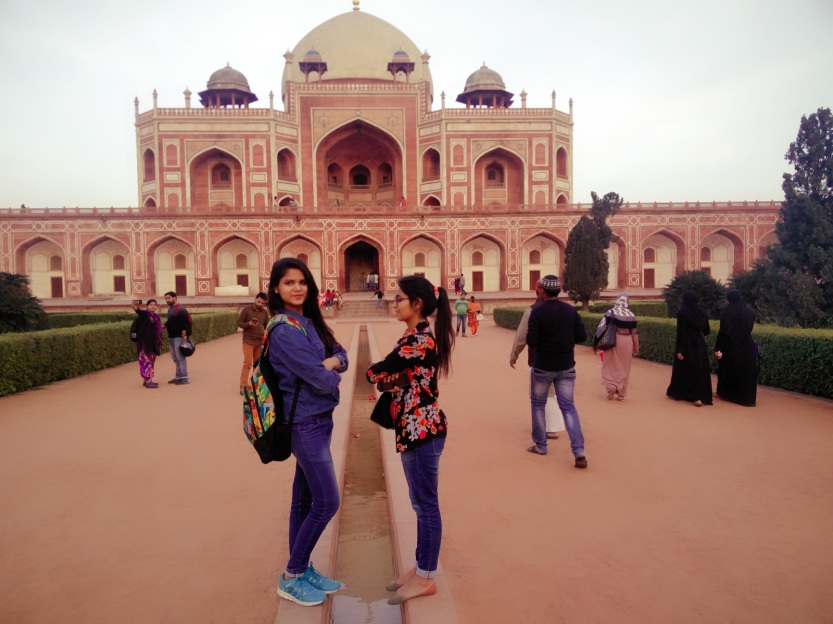 This tomb was the first one to be made by unique combination of red sandstone and white marble, which is why I was so excited to see it. It also has a unique brass finial over the dome which is 6 meters high. The tomb was built on octagonal pattern and looks alike when viewed from different sides. On each side, there is a highly sloped stair case that leads you to the roof top.

The sun was setting and the view looked beautiful. Our ears were enchanted with the nawaz that was going on in the mosque and the prayers recited in the nearby Gurudwara. All this created a pleasurable and gratifying atmosphere around. We stepped down the stairs and entered inside the tomb. It houses the main grave of Humayun. This main tomb also has the graves of Bega Begum, the lady who built the tomb, Hamida Begum, Dara Shikoh(son of Shahjahan), and other Mughal emperors. 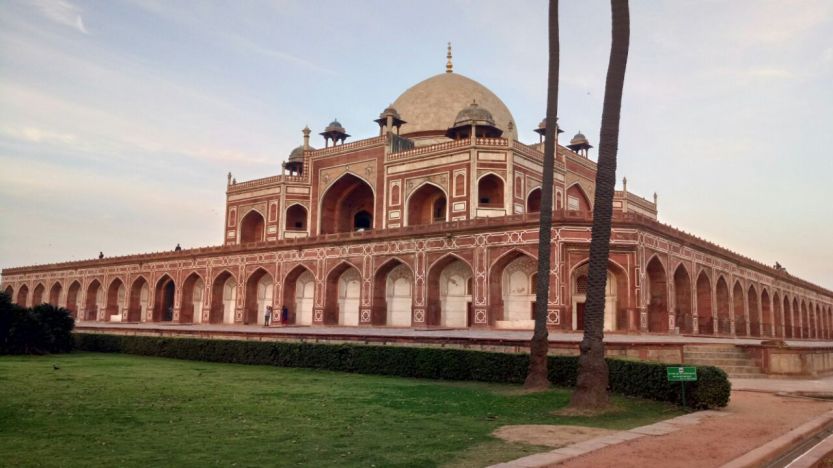 The sun was set already, so we decided to leave. While proceeding towards the exit, we kept on tilting our head back and saying – It’s WOW!

They say, every time you visit the same place again and again, you get to explore and notice something new. And visiting Humayun’s Tomb proves the same. It was mine and Ankit’s maiden visit though but Ajeesha was visiting it the third and Annu the second time. The way they were giving a glance at this magnificent masterpiece, I could figure a strange and unfamiliar expression on their face. This huge complex is so vast that despite being there multiple times, you still won’t be sure if you have seen everything that there is to be seen.
Well, visiting the Humayun’s tomb made me found something that I hadn’t noticed in the past to admire & photograph( Umm! the major proportion is clicked by Ajeesha.)

– Humayun’s tomb houses around 150 graves in and around the whole site.
– It took around 9 years to built this magnificent piece and was the first garden-tomb on the Indian sub-continent.
– Before being transferred to this tomb, the body of the emperor Humayun was first buried at two different places – the first one being the Purana Quila or the Old Fort and the second one in Kalainur (Punjab).
– Humayun’s tomb served as the model for the later built Taj Mahal.